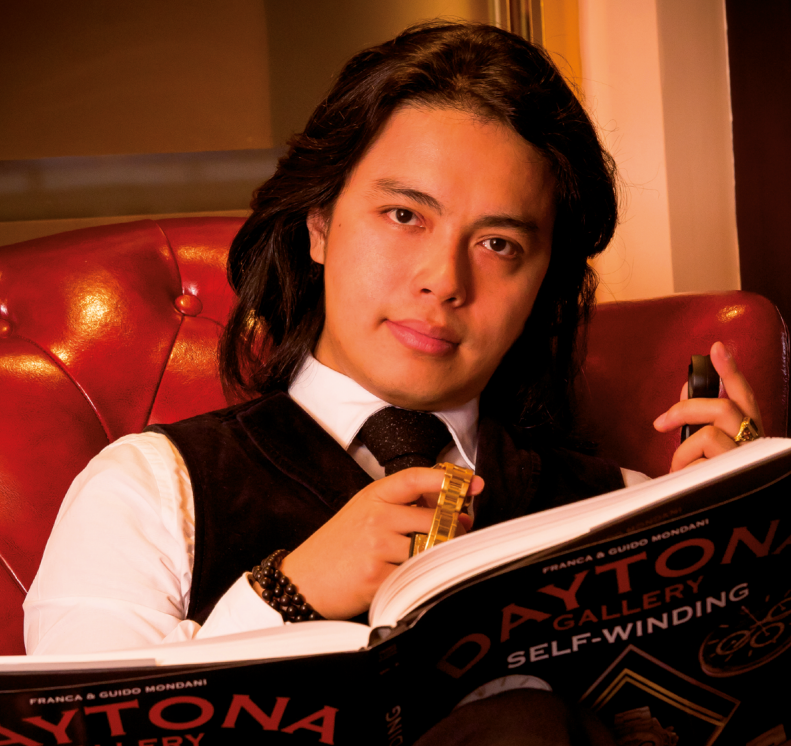 1.How old are you and when did you start working with your parents for the family shop?

I am 33 years old. I started working for my family’s pawnshop in 2011. I am in the fourth generation now in this business. We have been pawn brokers in Hong Kong since the mid- late 1940s and expanded our business to Macau around the early 1950s. Our current pawn shop in Macau is Veng Seng Casa de Penhores. I also started my own business, Alexander House, a shop that specialises in watches, jewellery, antiques and all kinds of rare collectibles.

2.Apart from buying and selling watches, you’re also a collector; which are your favorite watches?

That’s a tough question, my taste for watches is pretty wide-ranging. From vintage to modern, I love them all! With respect to recent purchases, I like the Rolex Day-Date 18348 “Jurassic” dial, which is basically some kind of fossil made dial. Another current favorite of mine is the Rolex GMT-Master 1675 with Mk.IV Tiffany dial. And yet another favorite would be the Rolex GMT-Master 1675 with Mk.I Long E dial, which I bought directly from a Vietnam War veteran. It’s always fascinating to know the story behind a watch. With respect to non Rolex watches, I recently bought a mid 1960s Blancpain Fifty Fathoms Aqua Lung “No Radiation” and an Audemars Piguet 25643 with cal. 2870, the thinnest selfwinding Tourbillon, which are also among my current favorites.

3.How would you describe the horological market in Macau and in China?

The Macau market can be divided into the local market and the market, that caters mainland Chinese tourists. The tourist market is the main driving force there. Over the past 10 years brands such as Cartier, Vacheron Constantin, Patek Philippe, Jaeger LeCoultre, Tudor, Omega, Rolex, especially luxury dress watches made of precious metals, with diamonds and gems, and with complications, such as tourbillon, perpetual calendar, moon phase etc., have been a big hit. Many watches were customized with diamonds to boost their salability. Basically, anything which was fashy sold like peanuts. But during the past 2-3 years the trend has changed tremendously. These days it’s all about sports and professional watches: mainly models from Rolex, Audemars Piguet and Patek Philippe like Submariner, GMT Master II, Daytona, Nautilus, various Royal Oak and Royal Oak Ofshore etc. (this is also true for the local market). In a way, I would say buying and selling are less interesting than before. In the past any brand could sell and we would have bought all kinds of brands and models, but now clients are only looking into the main 3-4 brands, which I mentioned above. The appetite for vintage watches is slowly building up as well. Generally speaking, the vintage watch market on the mainland China and Macau is still relatively new and underdeveloped. The frst cities that started to build up a substantial collector’s market were Beijing and Shanghai, but China as a whole is still huge potential, considering that most of the markets know nothing about the value and fun of collecting vintage watches, yet.

4.How would you compare the Chinese horological market to the one in Europe?

30-40 years ago, when China began to opened up its market and the Chinese economic reform started, most Chinese in mainland China just knew Titoni watches. Rumor has it that Lin Biao, a famous Marshal of the People’s Republic of China, who played a pivotal role in the Communist victory during the Chinese Civil War, was wearing a Titoni when his plane crashed, so it became famous back then, but I am not sure if the story is true or not. Between late 1980s to early 1990s most people mainly knew Tudor watches and the popular references models 72033, 72034, followed by the Rolex references 16033, 16034, 18038, Cellini etc. Since about 2000 Omega Constellation and Piaget models like the Dancer were a big hit, followed by Patek Philippe and Vacheron Constantin and all their complication watches. Then recently, owning a Richard Mille has become a status symbol. Hong Kong has always been one of the world’s largest watch trading hubs. Most of the watches that passed through Hong Kong were destined for China, but not many people know that a lot of watches were actually sold to pawnshops in Macau. Since 2000 the opening of casinos in Macau has led to an exponential growth of tourism. Hundreds of thousands of Chinese tourists flock into Macau every day, bringing millions of dollars of revenue into the city through gambling, shopping and all sorts of entertainment. Casinos are open 24 hours a day, so are the pawnshops. Pawnshops flourished from approximately 40 to over 180 pawnshops and many of them not just offered normal pawn services, but also provided a 24-hour luxury shopping experience. From the simple Tudor Prince Date to a Patek Philippe Grand Complications – they were all sold through pawnshops in Macau. The ups and downs of the Chinese watch market were mainly due to fashion trends. In comparison, the European market is still a bit more sophisticated: a more collector orientated market, where people know what is rare and special. Mechanical watches had been invented in Europe after all, and most well-known brands have been created in Switzerland. Given the quick and unpredictable changes that have taken place on the Chinese market, it won’t take long to catch up with the European market.

5.Today many dealers have problems finding good quality watches to sell; do you have to travel a lot to find good pieces?

Yes, definitely, I travel all over the world. I travel to Europe, Americas, Japan etc. I would go anywhere to find a good watch. There are no best or worst places to find a quality watch. You can find them anywhere.

6.Which was the most important watch that passed through your hands in recent years? 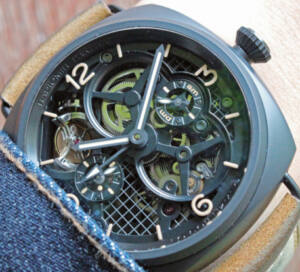 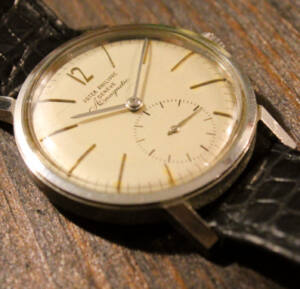 Online platforms have become one of the main ways to sell watches. They offer dealers the opportunity to expand their customer base and allow oversea clients to see and buy your stocks. They also introduced a lot of new dealers to the market, since there is no need for the traditional “bricks and mortar” approach. With the rise of online platforms, anyone who is interested in the watch business, can become be a dealer.

8.What are the main difficulties for a vintage watch collector today?

Due to the lack of access to information and knowledge it used to be a problem to learn more about vintage watches in the past. But today there is a sea of information out there, especially online. However, it is important to compare and filter information. It can be confusing when you receive contradictory information, for example: you think a dial was made in one year and then someone else says that it dates back to a different year. So, it is rather important to use good sources of information, like the Mondani books, which definitely are highly recommended handbooks for collectors.

9.How did social medias media change the world of watches?

“Awareness” is the word I would use to describe the change. Social media platforms like Instagram, Facebook, Twitter, Weibo etc. have allowed people to show and talk about the jewels, they possess and to let people know that “oh, I never knew such a watch exists” and “wow! I really want one, too.” Letting people know of the existence of such pieces, created a crave for the rare and beautiful. Which also brings us dealers more business and hence has a good and healthy impact on the industry. However, at the same time, social media have increased the competition among those who sell watches. In the past, when social media weren’t widely used, most owners/collectors would sell their watches to dealers/pawnbrokers, now many of them would sell directly to end users online.

10.Which models are rising the most in China?

11.What’s so special about the watch?

Mainly it’s a fashionable trend, but don’t get me wrong: all of them are beautiful and well-designed watches. Another reason is for investment purpose, many of these models are currently hot in the market, so most people tend to think these watches holds a good value when they resell it. 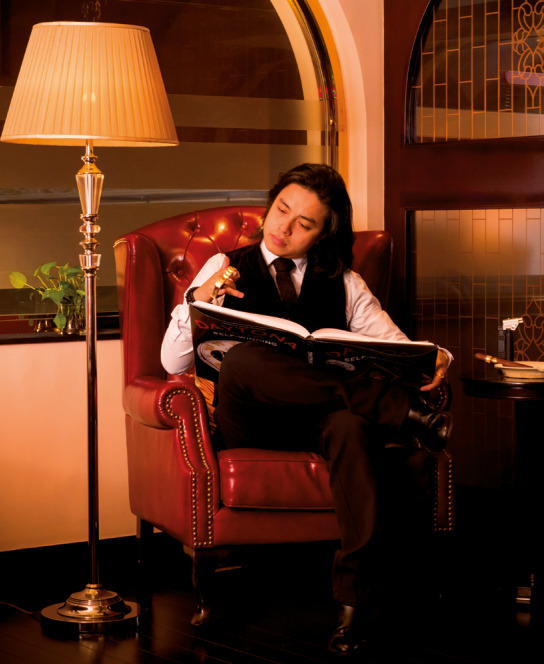