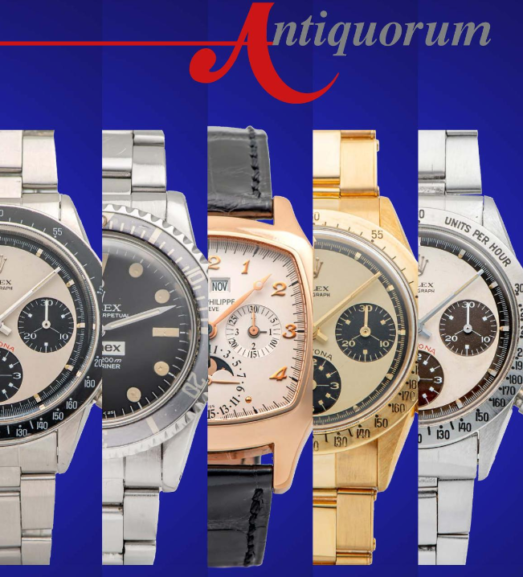 After an intense 11 hours and 45 minutes of auction Antiquorum yield more than CHF 7 Million, a remarkable global result with 85% of lots sold and some memorable individual bidding performances as detailed below.

“As the CEO of Antiquorum in a year full on instability and surprises, it has been challenging to adapt our business model which requires a lot of personal contact and intense travelling “not quite a social distancing business model”. I am therefore immensely proud of the accomplishment of our team in succeeding to organize and offer this November 8th, a splendid auction in Geneva with a remarkably rich timepieces selection. Antiquorum digital evolution started this March 2020 by being the first international auction house to broadcast online. Since then, we have been able to launch the “Virtual Valuation Days” with our internationally based experts virtually meeting with clients and analyzing pieces 24h/7 throughout the world.” said Romain Rea, Antiquorum CEO.

Highly expected before the auction, LOT 59 – Omega Ref. 166.077 Seamaster Ploprof Prototype achied a record price beyond 11 times its low estimate. The historically important and extremely rare self-winding staintless steel prototype diver’s wristwatch was directly consigned from the family of Mr Bonnici. A lucky bidder grasped the almost unique opportunity to acquire a prototype Ploprof from the best provenance one could ever wish for.

The current “PROTOTYPE” Ploprof, as per its caseback engraving, is part of the initial series given to members of the Cousteau team to be tested during their dives. Omega archives, testifies that all these prototypes carries a batch number. In this case these Seamaster 600 prototypes were part of batch 4, and then followed by the watch issue number starting at 100, making this example inscribed 4-100, the first one ever made in this batch. Rarities, the watch came with its Omega Life book inscribed: Life Book, Ploprof No. 4-100, Serie 0, which gives instructions on how to use the watch and has a dive log book at the back that details each dive with comments on issues, defects to report back to Omega (some comments read: “ hard to read at -100m, bracelet breaking before dive, hard to use the crown under water, until its last entry on February 10, 1972 where it is commented movement no longer running”). Fitted with anearly dial featuring the word Professional above Seamaster 600 and a graining on the case, typical of the very early versions as well as the large lume hour hand, it has all the characteristics just like the day it was delivered in July 1971. 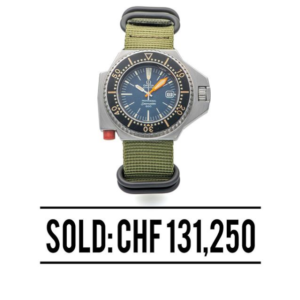 After the World-Record set by Antiquorum earlier this year, with a Rolex Ref. 1680 Submariner, COMEX from 1979 sold CHF 524’000 incl. premium’s buyer, LOT 374 – Rolex Ref. 5514 Submariner COMEX from 1976 in stainless steel was under the spotlights and did not disappoint with a hammered price well above the high estimation. 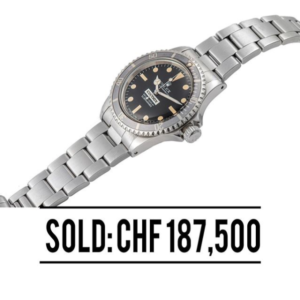 Every auction in greater demand, Audemars Piguet attractiveness was once again illustrated in particular by LOT 118 and LOT 405.

Debuted in 1972, designed by the iconic Gérald Genta, it was first produced in four series marked A, B, C and D, each with changes to the movement or the bracelet. The B-Series was limited to 1000 pieces and features the original caliber 2121 produced by JaegerLeCoultre. Sold in June 1974 this 18k yellow gold wristwatch B12789 Serial N°040 with its gray “litte tapestry” pattern dial in exceptionally good condition is highly appealing for collectors considering that on top of what has already been mentioned above, the gold version of this reference is rarest than steel models. – interesting fact: the folding buckle is also in 18K yellow gold. 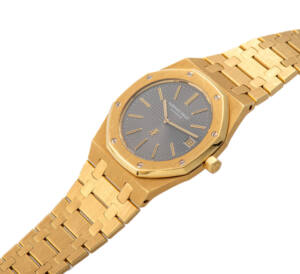 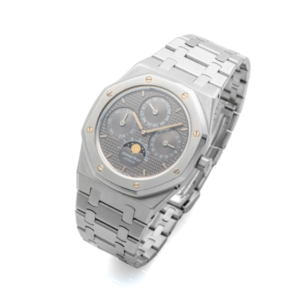 Rare occurence at an auction, collectors were thrilled to have access to two gorgeous Tudor Ref. 9411 Submariner Snowflake in New Old Stock condition with original boxes and warranties: LOT 492 & 493.

The auctioneer also presented an interesting selection of Rolex with rare and colorful dials realizing interesting results as per below: 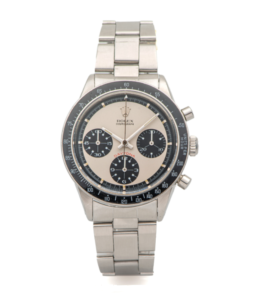 One of the rarest Cosmograph models, reference 6264 was produced for a few years only in the early 1970s. It is understood that only some 1,700 examples in stainless steel were ever made of reference 6264. Along with the rarity of the model, the present watch is also eye catching due to the “Paul Newman PANDA” dial (watch nicknamed “Paul Newman” Daytonas in the 80’s after a picture of the famous actor wearing the watch was found).

Together with reference 6262, it was the last Rolex chronograph watch to be fitted with pump pushers but its caliber 727 boasts a higher frequency beat improving its precision.

Never offer on the market before, this watch was purchased new at Grassy retailer in Madrid by the father of the current owner for his 16th birthday. Still fitted on its original bracelet, the watch was worn regularly but has been kept in great condition with no service marks inside the caseback and more importantly its dial has been kept in near mint condition, making this rare reference always a collector’s item.

Extremely fine and rare theRef.6239 in 18K yellow gold has been made in approximately 300 pieces, that makes it one of the rarest yellow gold Daytona chronograph. Antiquorum experts estimate that only 10 percent of these were equipped with the exotic “so called” Paul Newman dial. To unearth such a well-preserved piece from 1968 with its full set and all the service history was a tough challenged awarded last Sunday by a notable result CHF 350’000. 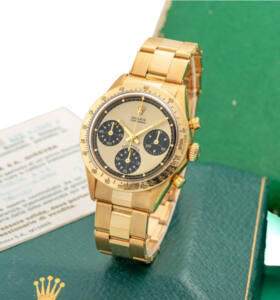 Antiquorum, The World’s Premier Auctioneers of Modern and Vintage Timepieces, established in Geneva in 1974, Antiquorum has carved its own unparalleled niche in the auction world by cultivating a thriving collector’s market for timepieces worldwide and consistently obtains the highest prices for timepieces, auctions timepieces with exceptional provenance and rarity and has set many world records. Resolutely avant-garde, Antiquorum was the first auction house to offer full online service with the possibility to place absentee bids or register to bid in real time during the auction. Antiquorum holds auctions in Geneva, Hong Kong and Monaco with previews held in major cities worldwide. With its internationally recognized staff of watch experts providing unsurpassed expertise and services and its dedicated pursuit of innovative auction methods, Antiquorum continues, more than ever before, to make history in time.