Extremely rare ‘1 of 20’ Heuer Skipper watch could fetch upwards of £65,000 at Fellows An extremely rare Heuer Skipper watch designed in the late sixties to celebrate Emil Mosbacher’s second America’s Cup win could sell for upwards of £65,000 at Fellows Auctioneers. It is believed that Jack Heuer only designed around 20 of these watches, circa 1968, following Mosbacher’s sailing win where his winning boat contained Heuer Chronographs. This particular example, nicknamed a ‘Skipperera’ due to it using a sixties Heuer Carrera case, features as Lot 59 in Fellows Auctioneers’ Luxury Watch Sale. The watch has an estimate of £45,000 – £65,000, and the auction will take place on Monday 26th October. The Heuer watch is powered to assist sailboat racers. Due to the effects of wind and water, it is impossible for racers to start together. Thus, competitors await behind the starting line for a horn or gunshot. The races start with a 5, 10, or 15-minute countdown, at which point boats are positioned as close to the starting line as possible before the actual race begins. The Heuer’s manual wind Valjoux calibre 7730 ensures the elegantly designed watch can essentially act as a timer for yachters, offering a 15-minute register. The soughtafter timepiece has a reference 7753, and it can be viewed at Fellows’ Birmingham and London offices. 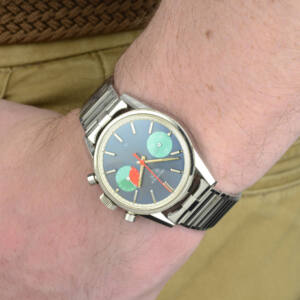 The stainless steel chronograph contains a blue dial with baton hour markers, and a coloured subsidiary recorder dial to three and nine. It is fitted to an unsigned stainless steel bracelet with folding clasp. It is in an overall good condition, and bids can be placed on the watch in advance of the auction now. Customers can also sign up for an account on Fellows’ website and register to bid in preparation for the sale on 26th October. Steven Yambo, Senior Watch Specialist at Fellows Auctioneers, said: “There aren’t many watches about with a design as original and quirky as this Heuer Skipperera. The history of this watch being designed to honour the America’s Cup with a strong emphasis on sailing ensures it will be hugely popular in our Luxury Watch Sale. It can’t be ignored just how rare a watch like this is to sell at auction, so we are privileged to have it go under the hammer on 26th October.” 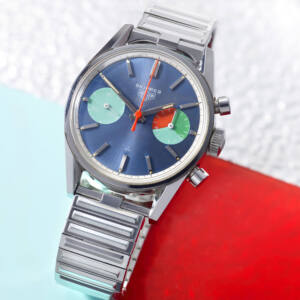