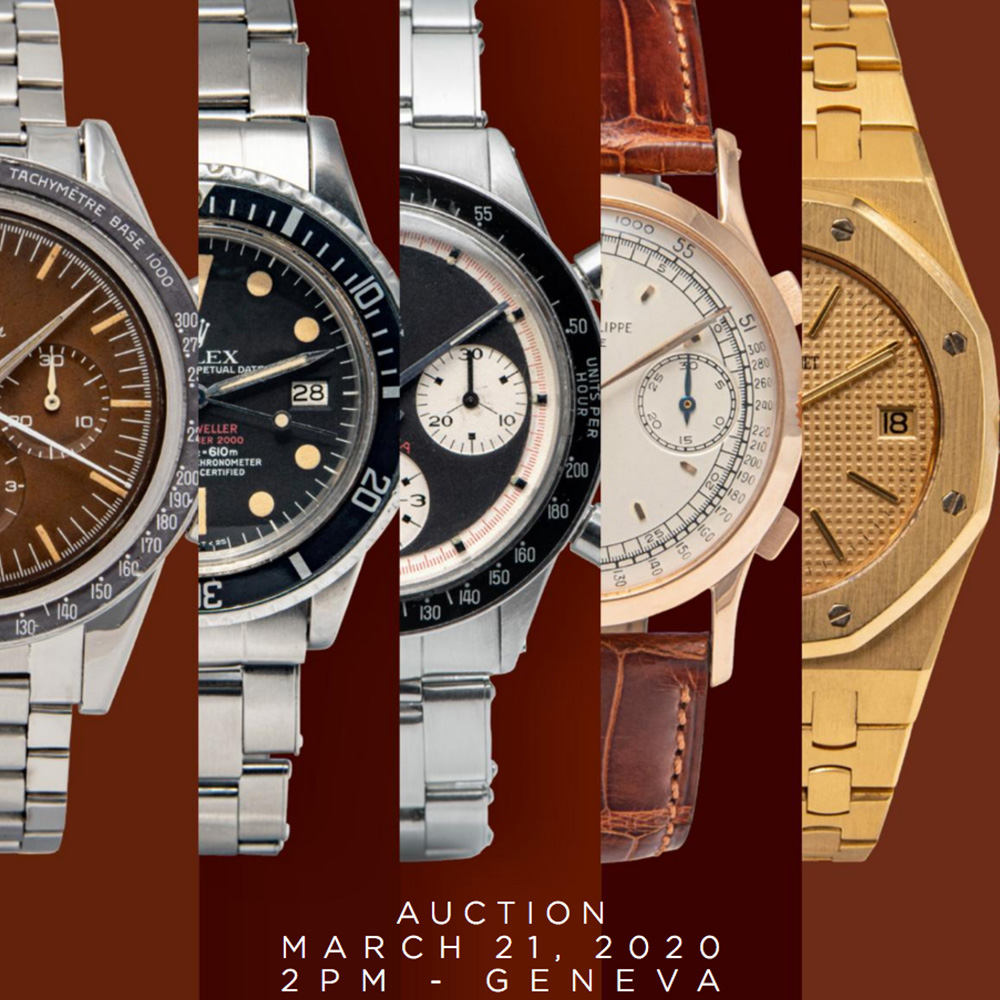 “As the first horological auction house established in Geneva, it has always been part of Antiquorum philosophy to innovate. In 1974, nobody had thought that watches could be auctioned; today, in such an unprecedented situation it was challenging but important to accommodate with the context and to respect the fundamental stay at home priority” says Romain Réa – CEO & Watch Expert of Antiquorum.

On Saturday, it is in the empty room of Geneva Antiquorum headquarters, that the auctioneer, Julien Schaerer, stepped on his podium facing the online broadcasting system and several experts holding their phones with registered collectors on the line, ready to go through the 294 lots entrusted. The auction selection traces an exceptional illustration of watchmaking history as well as contemporary know-how of modern manufacturers.

At 2pm GMT+1, the auction started with the pocket watches and the interesting selection from the iconic 1994 Antiquorum auction “The art of Vacheron Constantin” (lot 14 to 26) and concluded with Lot 31, a very fine and rare Patek Philippe pocket watch perpetual calendar, minute repeater from the early 80’s sold for 57,500 CHF.

The auction went on with the fine vintage and modern watches selection. During this intense session, bidders from no less than 24 countries* flashed up on the online monitors. The highly appealing Jaeger-LeCoultre and IWC selections drove a lot of interest with an average hammered price above their high estimates. Indeed, we can mention the noticeable result of Lot 193, the Jaeger-LeCoultre ref. 201 Reverso “Chocolate dial” in steel, sold for more than twice its estimate and Lots 197 to 200 military IWC references going for three to four times their low estimates of which Lot 200, a superb IWC vintage diving watch yielding 16,250 CHF.

The always growing interest in Omega watches has been again demonstrated by lot 150, a Speedmaster in steel from 1968, hammered for more than twice its low estimate and lot 291, the attractive Omega Speedmaster “The Golden Panda” in yellow gold went for 52,500 CHF. Rolex, which continues to be in great demand by collectors, represented 25 % of the lots entrusted for the sale. Collectors were thrilled by the Rolex ref. 166660 Sea-Dweller Comex sold for 95,000 CHF (Lot 265) and the top lot of the auction, Lot 295, Rolex 6241 Daytona “Paul Newman” steel sold for 181,250 CHF. It’s interesting to underline new trends and future collector pieces such as lot 280 & 281, Audemars Piguet Royal Oak ref 15002, a growing collecting potential for these watchmaking youngtimers with less than 25 years of existence. Lot 281 in yellow Gold got hammered for 87’500 CHF, a World Record for this reference produced in only 27 pieces.

The auction ended with most remarkable lots of which lot 293, a very fine and probably unique Patek Philippe ref. 5131/1, which captured the heart of a collector for 150,000 CHF.

Antiquorum proves once again that interest in rare timepieces remains alive and strong.

Please find the results on this link: https://catalog.antiquorum.swiss/en/auctions/327/top_lots

Antiquorum, The World’s Premier Auctioneers of Modern and Vintage Timepieces, established in Geneva in 1974, Antiquorum has carved its own unparalleled niche in the auction world by cultivating a thriving collector’s market for timepieces worldwide and consistently obtains the highest prices for timepieces, auctions timepieces with exceptional provenance and rarity and has set many world records.

Resolutely avant-garde, Antiquorum was the first auction house to offer full online service with the possibility to place absentee bids or register to bid in real time during the auction. Antiquorum holds auctions in Geneva, Hong Kong and Monaco, with previews held in major cities worldwide. With its internationally recognized staff of watch experts providing unsurpassed expertise and services and its dedicated pursuit of innovative auction methods, Antiquorum continues, more than ever before, to make history in time. For more information, please visit: https://www.antiquorum.swiss/