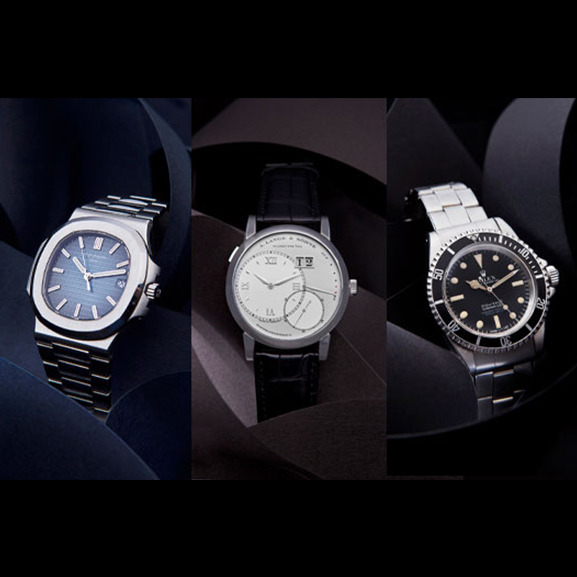 Mondani Web is extremly happy to present Watches Online: Falling for Time, including vintage and modern watches from a range of renown brands that include Patek Philippe, Rolex, A. Lange & Sohne, OMEGA, Breguet, and many more. Highlights include a sublime Rolex ref. 5512 from 1966, a rare and sought after Patek Philippe ref. 5130P World time “Mecca”, a beautiful ladies’ Breguet Reine de Naples, and many more. With over 200 lots offered, the time to fall for a new watch is now.

Additionally, we are proud to support the Novak Djokovic Foundation through the sale of lot 1 – a tennis racket used by Djokovic accompanied by a Seiko wristwatch. Coming from the war-torn country of Serbia, Djokovic was lucky to have the support of his family that has led to his incredible success, on and off, the tennis court. To make sure that all Serbian children reach their full potential, the Novak Djokovic foundation supports early childhood education through collaboration and investment in teachers to create the self-sustaining schools necessary for their success.

Highlights will be on view at Christie’s New York, 20 Rockefeller Plaza.

Follow @mondanievents on Instagram to be always informed about the best events in the world of luxury and watches. 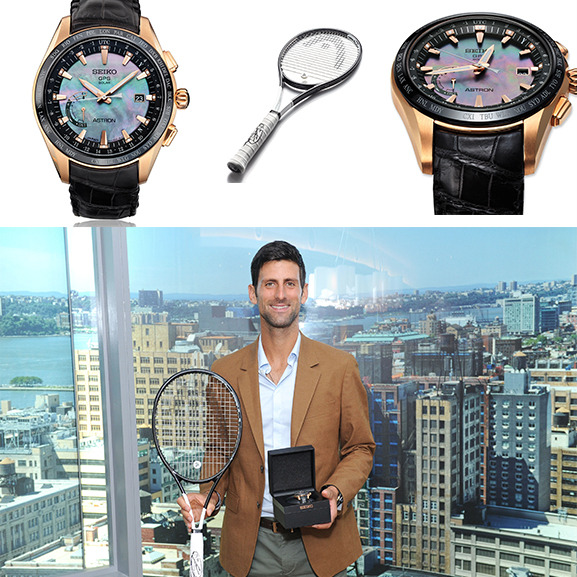 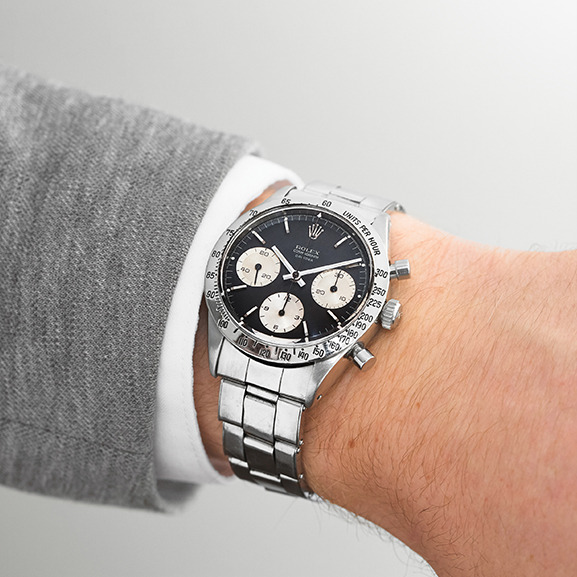 ROLEX, DAYTONA, REF. 6239 | Circa 1965
The reference 6239 was the very first model of the celebrated “Daytona” series and could be found in sales catalogues in Europe as of 1964, though it is thought that the model was available in the US already in 1963. This model was available in stainless steel, 14k and 18k gold, reference 6239 was the firm's first chronograph with the tachometer scale engraved on the bezel and the subsidiary dials printed in a different color than the main dial for better legibility. 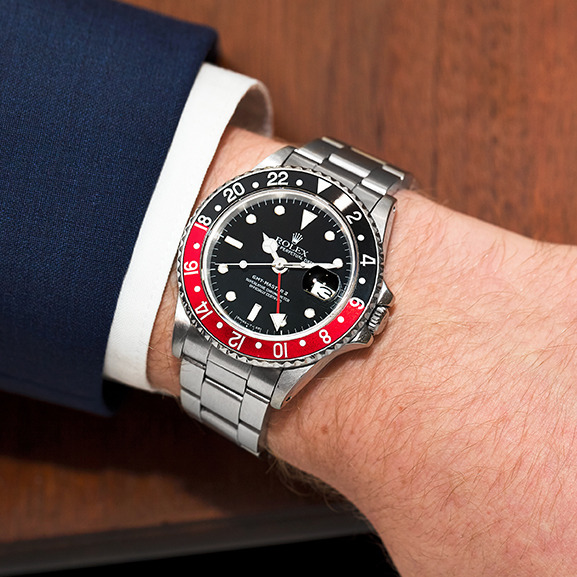 ROLEX, GMT-MASTER II “COKE”, REF. 16710 | Circa 1996
The GMT-Master II was released in 1989 and was in production until 2007. There were three bezel types available: red and blue, red and black, and all black. This watch offered here features the black and red bezel affectionately known as the “Coke.” This example also features one of the earlier dials that indicates the tritium on the dial by “T<25." 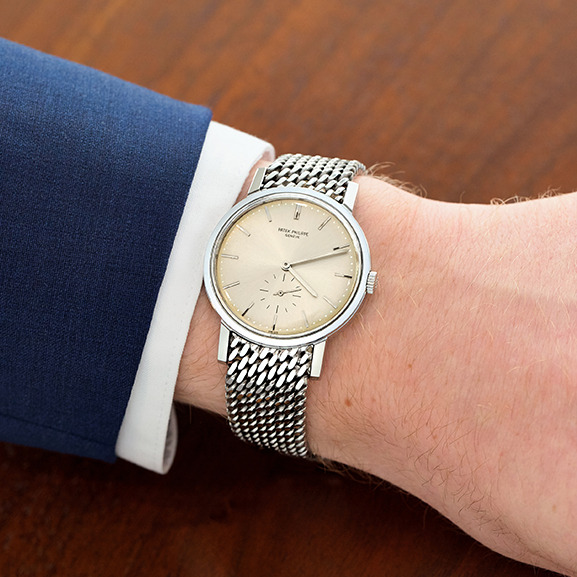 PATEK PHILIPPE, STEEL GAY FRERES BRACELET WATCH, REF. 3466 | Circa 1967
This stunning stainless steel dress watch is offered in superb condition. Ref. 3466 was produced between 1962 and 1970 and less than 1000 examples of this reference were produced. The watch features a screw down case back, pearl-like hour markers, and engraved-enamel signature.

Adding to the vintage charm of this watch is the Gay Freres mesh-style bracelet. The bracelet is stamped with the “GF” and is marked as being produced in the fourth quarter of 1962. Although this watch originally came on a leather bracelet, the steel GF bracelet is an upgrade that was likely made for an earlier example of the same reference. 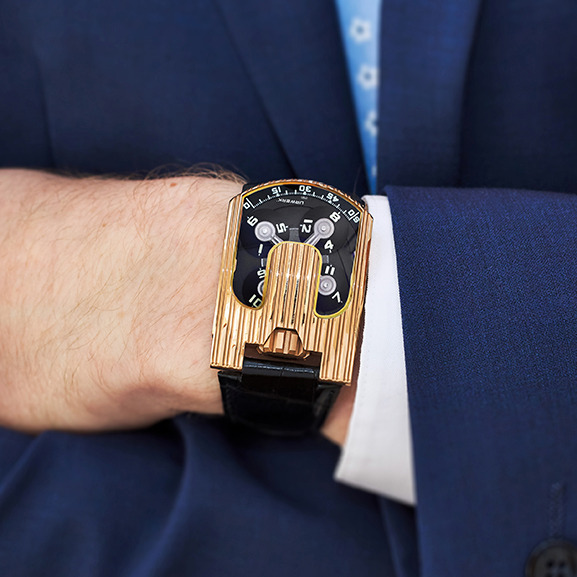 URWERK, 18K PINK GOLD, REF. 103.03 | Circa 2010's
As a brand, Urwerk has pushed the boundaries of watch making, drawing inspiration from science-fiction. The 103 series continued this innovation and it is seen in the orbiting and rotating satellite discs that indicate the time. The aluminum satellite discs are supported by a titanium cross. Every four hours, the discs indicating the hour complete a full rotation.

On the back of the 103 is another technical innovation – the first control panel for a watch. This control panel consists of a 36-hour power reserve indicator, a chronometer, and an adjustment screw allowing precise and customized timekeeping for each wearer.

This watch brings together form and function as well as any. This is a great opportunity to own a watch that exemplifies the limits of watch making being pushed. 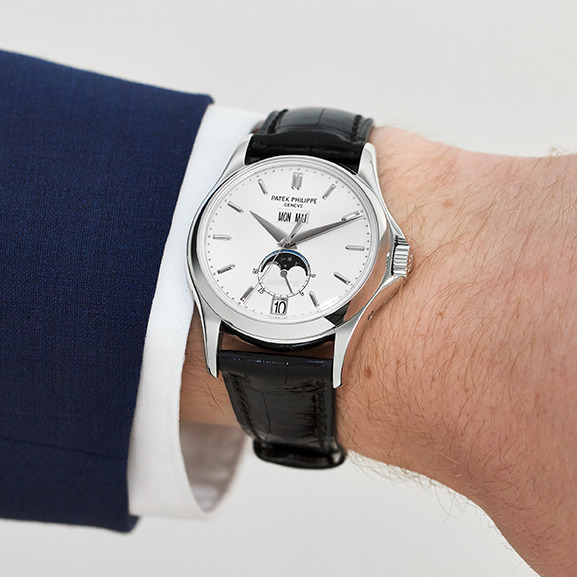 PATEK PHILIPPE, WEMPE 125TH ANNIVERSARY, REF. 5125G | Circa 2003
The W125 was specially produced in 2003 to celebrate the 125th anniversary of the relationship between Wempe and Patek Philippe. This series was offered exclusively through Wempe retailers. “Wempe” is printed on the dial in silver and engraved on the case back. In total, only 475 examples of this model were produced and of that only 125 were in white gold. This watch is number 20 out of 125. The watch was made to resemble the legendary reference 3448/3450 with its dauphine hands, baton numerals, and smooth bezel. The day and date are displayed in German. 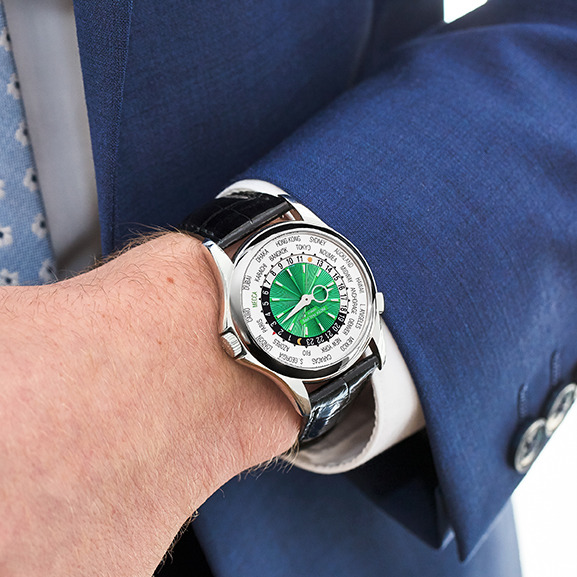 PATEK PHILIPPE, WORLD TIME “MECCA”, REF. 5130P | Circa 2011
This Patek Philippe ref. 5130P is a rare example of the highly-prized world time complication that the brand produces. Like other reference 5130s, this watch displays 24 cities to represent the 24 time zones. However, this model replaced the time zone represented by Moscow/Doha with ‘Mecca.’ Mecca is highlighted in green and is accentuated by the green guilloche dial. Many Muslims adhere to the hadith that says men are not to wear gold. Patek Philippe took this into account when choosing platinum as the case metal.

There are only 150 “Mecca” 5130s produced. This is a chance to own an extremely rare and special watch. 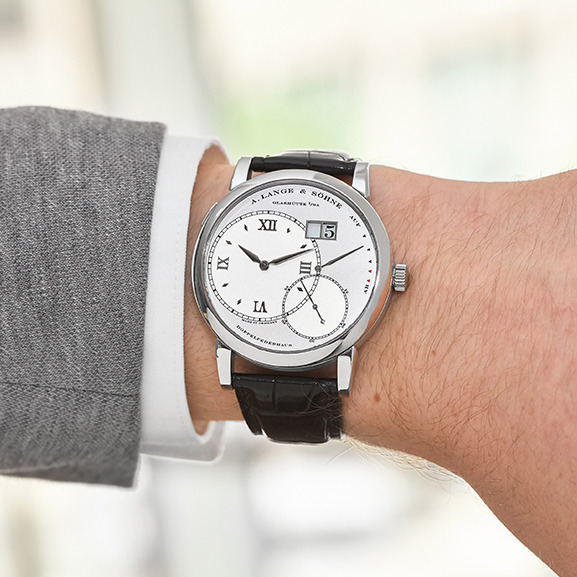 A. LANGE & SOHNE, PLATINUM GRAND LANGE 1, REF. 115.026 | Circa 2000's
The Grande Lange 1 is a perfectly balanced watch through asymmetry. It was first released in 2003 and updated in 2012. The Grande Lange 1 features the same sophisticated mechanical calibre, essential striking design and pleasing proportions that made the original Lange 1 so celebrated, in a slightly larger, 41 mm case. 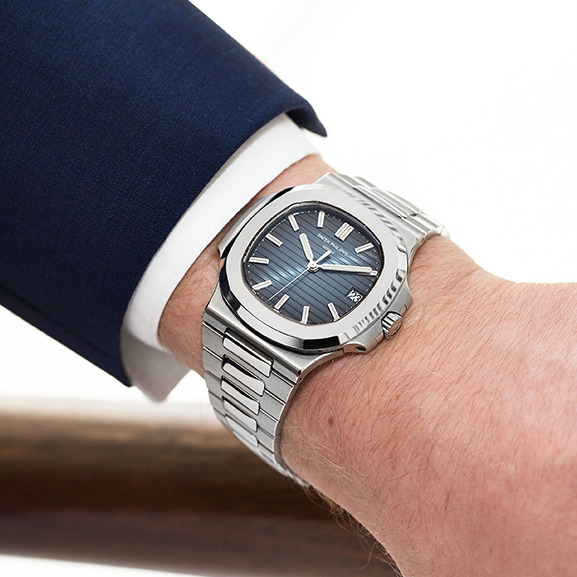 PATEK PHILIPPE, NAUTILUS, REF. 5711/1A-010 | Circa 2012
The Patek Philippe Nautilus ref. 5711/1A is arguably the most desirable modern watch in the world. The 5711/1A features a three part case construction with sapphire display back to reveal the caliber 315 SC. With center seconds, the 5711/1A immediately differentiates itself from its inspiration, the 3700/1A. Furthermore, the clasp construction of the 5711/1A is a double folding clasp as opposed to the single fold of the reference 3700/1. 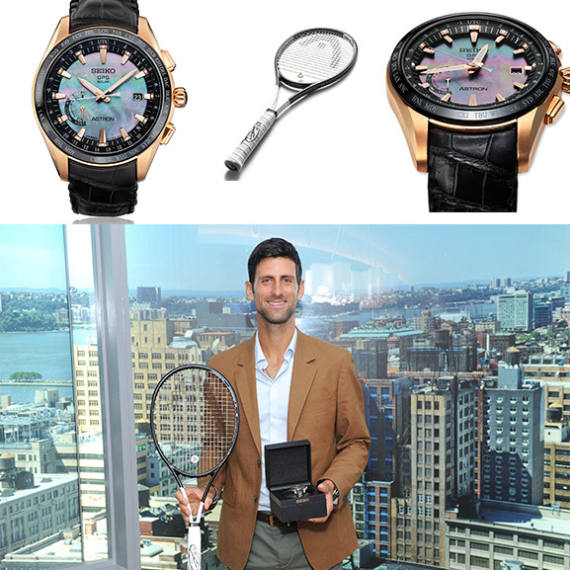 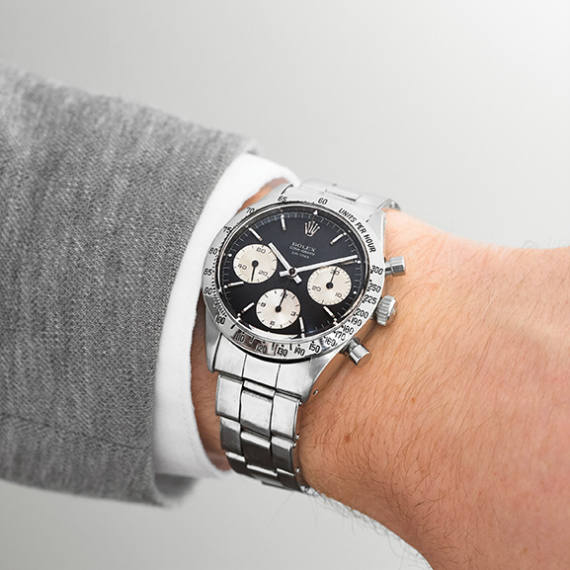 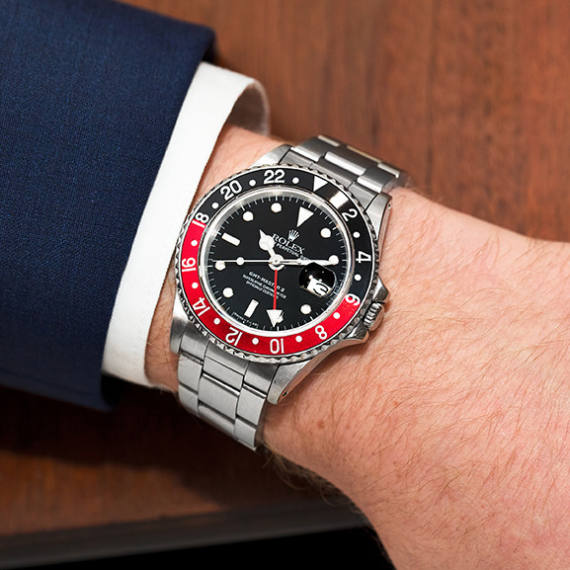 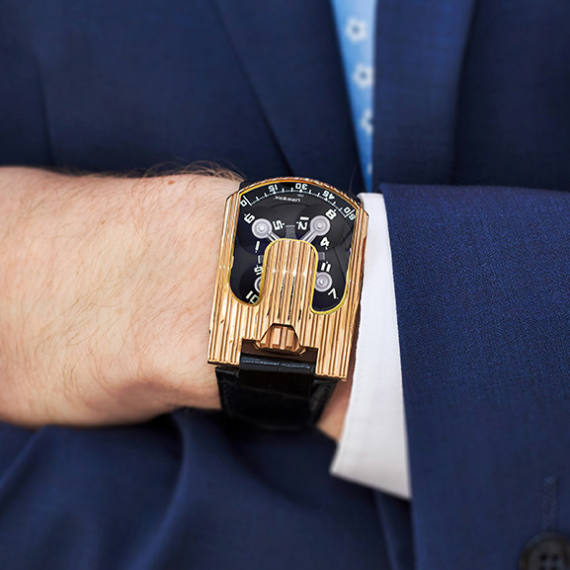 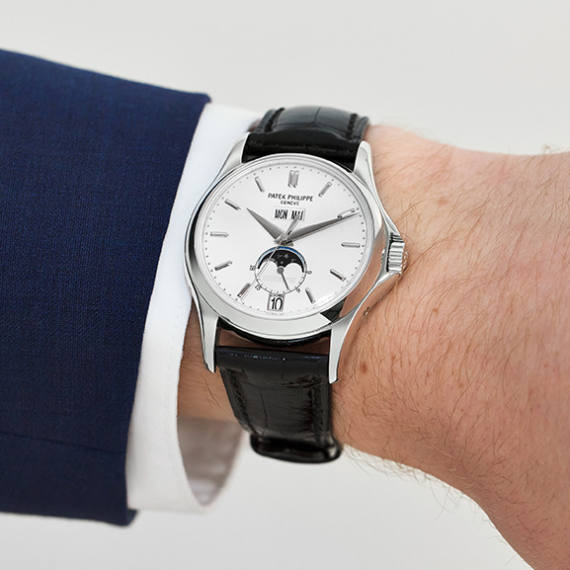 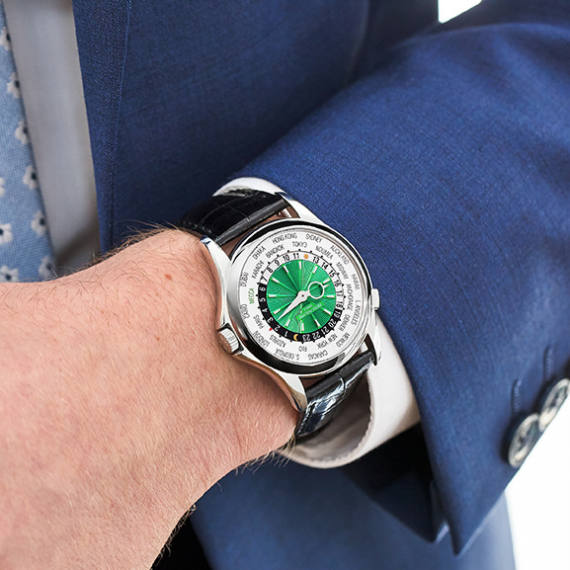 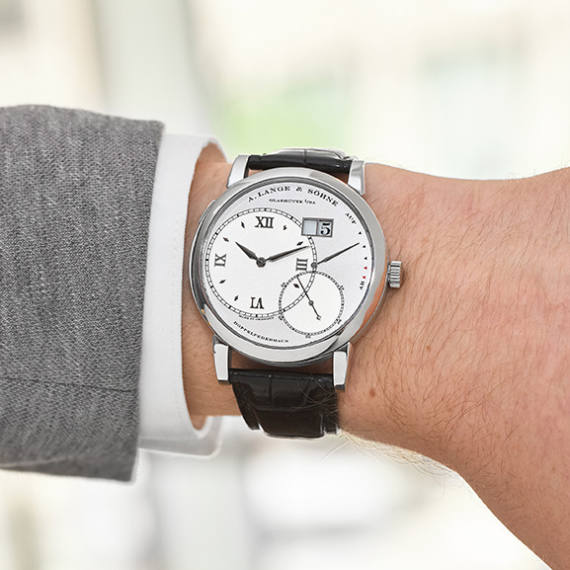 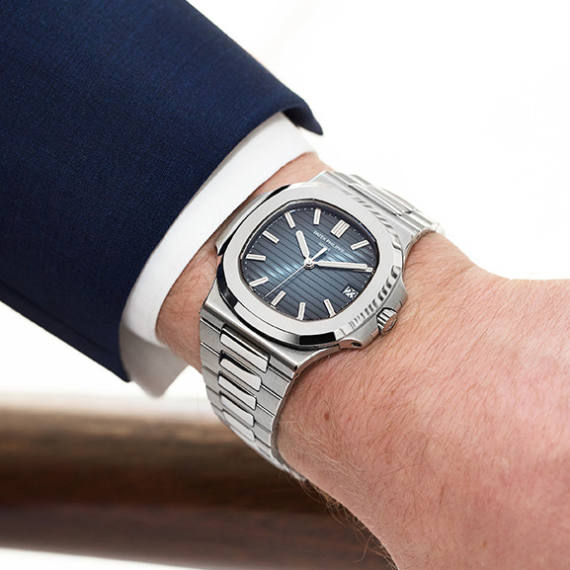