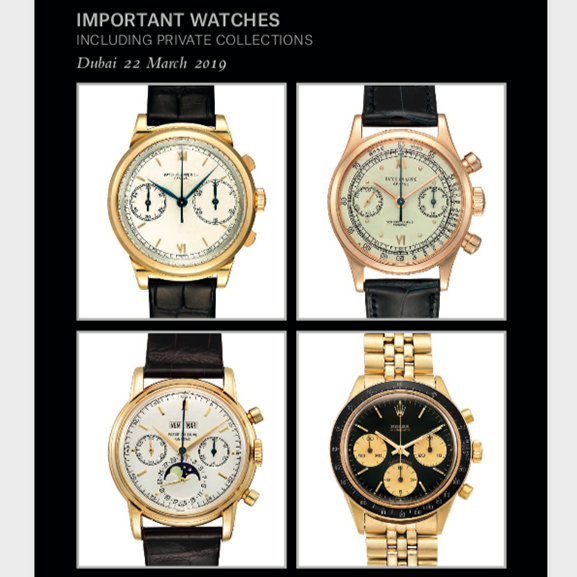 Christie’s leads the watch auction market in the Middle East for 12 consecutive years.

Dubai – Christie’s upcoming Important Watches auction on 22 March will present one of its best curated offering since the first Christie’s sale conducted by any international auction house in the region back in 2007. For 12 consecutive years Christie’s  leads this market and has for 2019 already witnessed increased momentum across the region, as Remy Julia, Head of Christie’s Dubai watch department pointed out and commented on the upcoming auction as followed:

“Over the past decade, Christie’s watch auctions in Dubai have contributed in new friendships, widen the collector’s circle, enhanced scholarship and in my opinion have helped building one of the most dynamic and fast growing buying markets in the world. Christie’s March auction of Important Watches celebrates the flourishing interest in vintage and modern horological masterpieces. Most notably, the Patek Philippe 1463R, originally retailed by Serpico y Laino, dating from 1950, which exemplifies the highest level of offering of vintage masterpieces, previously only seen in our Geneva watch auctions. Furthermore, the auction will present for the first time in the Middle East a unique Patek Philippe reference 1491, chronograph, manufactured in 1937 – a moment not to miss on 22 March.”

The Important Watches auction on 22 March 2019 will present just under 200 timepieces with a pre-sale estimate of $9,000,000 to $15,000,000, including various single owner collections, and a line-up of vintage Rolex Daytona, vintage perpetual calendars and chronographs by Patek Philippe as well as the largest selection of modern high complication ever offered in a Dubai watch auction. 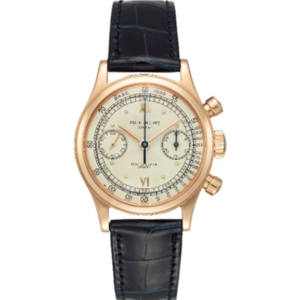 The Patek Philippe, reference 1463R in pink gold from the 1950s was previously owned by Eric Clapton and retailed by Serpico y Laino Caracas from Caracas.

Reference 1463, the only vintage Patek Philippe chronograph model with screw back case and round pushers, is without question one of the celebrated manufacturer’s most iconic and noble sports watches.  Reference 1463 was launched in 1940 and remained in production until 1965, the majority cased in yellow gold and therefore the present pink gold model is rarer, as only 55 recorded references 1463 in pink gold exists to date. The present watch is a fine example of this paragon of post war design, distinguished by its attractive and original overall condition (estimate: $550,000-850,000). 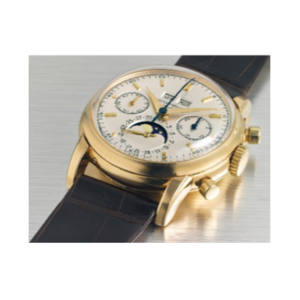 Reference 2499 is considered as the benchmark grand complication for Patek Philippe and would last a remarkable 35 years in the Patek Philippe line-up. The 2499 reference went through four iterations, and the level of rarity depends on which of the series you are looking at. In total, across four iterations and 35 years, just 349 examples of the 2499 reference watch were made, which equates to around 10 watches a year. The first and second series each lasted for only four or five years, making them the rarest of all. The most common reference 2499 is the third series (1960 to 1978), which accounts for approximately half of the watches made, from which our 1976 manufactured watch dates (estimate: $450,000-550,000). 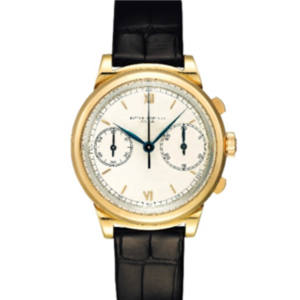 Certainly, altered for a prominent and faithful client of Patek Philippe in 1942, the case of reference 1491 had been enlarged, using the movement of the watch, which was made in 1937. Reference 1491 was made only as a “time only” wristwatch. Due to the chronograph movement, the case proportions had to be adapted accordingly, also the thickness had increased to 10.84 mm, again more than the time only version. It is however the highly unusual dial design which impresses with its oversize 30-minute register, the largest known on a 13 lines Patek Philippe chronograph wristwatch. Assuming this order was placed by a sports commentator who repeatedly needed the minute counter and who specifically asked for this oversize design (estimate $500,000-1,000,000). 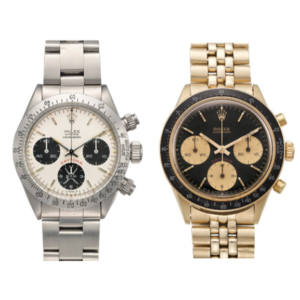 A Rolex Daytona reference 6241 with Cherry Logo has not been offered at any auction since 2014. The powerful looks of the watch are further boosted by the cherry red Daytona designation, the only note of color present on the entire watch. In stark contrast with the black background, it seems to nearly hover above the dial. Models in 14K gold, such as the present watch, were exclusively reserved for the North American market. Reference 6241 was introduced to the market in the early 1960s and remained in production until around 1969 (estimate: $380,000-580,000). 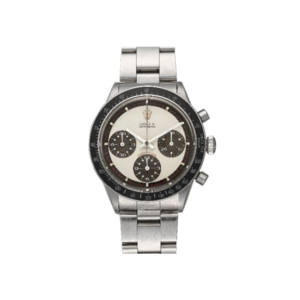 Other noteworthy Rolex’s are a Paul Newman Tropical Dial, reference 6241, bought by the uncle of the present owner at the age of 17, who entrusted the watch in 1998 to his nephew (estimate $200,000-350,000 – illustrated above left); or reference 4500, retailed by “Joyeria Riviera,” in Havanna, Cuba and offered for the first time at auction. Rolex produced only a limited number of the anti-magnetic reference 4500, during its one-year production in 1946 and of all known references 4500 only 5 are fitted with pulsometer dials as the present watch (estimate: $150,000-200,000).

From the “White Khanjar” Daytona series made for the Sultan of Oman, this Rolex reference 6265 was to be presented as a token of appreciation. The present watch was made circa 1979 and its receiver has kept the original box as well as a personalized card from His Majesty, the Sultan in an envelope stamped with the Khanjar emblem (estimate: $ 250,000-450,000 – illustrated above right). The collaboration between Sultan Qaboos bin Said Al Said and Rolex started in the early 1970s with the Sultan’s wish to show his gratitude to the members of the British Special Forces, SAS, who had successfully assisted him in his fight against rebels between 1970 and 1976. In the years to come the Sultan regularly ordered various Rolex models which he presented as gifts in recognition of a service rendered. The dials of these watches featured the Khanjar symbol predominantly in colours red and white, few examples in gold or green. 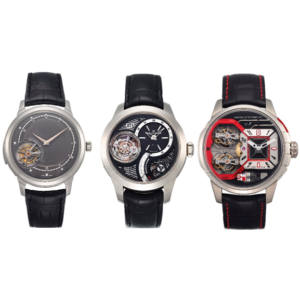 The selection of watches made by Contemporary Masters is led by a unique piece, made on special order by the Atelier Cabinotiers of Vacheron Constantin in 2011. It is a double-faced perpetual calendar tourbillon minute repeater wristwatch with zodiac and day/night indication and comes with its presentation box and full paper work (estimate: $350,000-650,000- illustrated above left).

By Girard-Perregaux is a limited-edition tri-axial tourbillon wristwatch with power reserve made circa 2016. Christie’s will offer for the first time at auction one of these 5 limited edition pieces and the most desirable collector’s number: number 1 (estimate: $200,000-400,000 – illustrated above middle).

Histoire de Tourbillon N.7 by Harry Winston is a limited edition of 20 pieces – 10 were made with a red dial and the other 10 with an anthracite dial. The present lot, an 18-carat white gold, two biaxial tourbillons with 55 hours power reserve was made circa 2016. Each tourbillon contains 117 parts and weighs only 0.76 grams (estimate: $200,000-400,000 – illustrated above right). 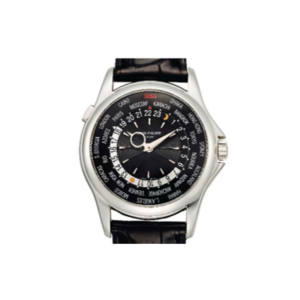 Produced in a limited edition of 50 pieces in platinum, reference 5130P by Patek Philippe is a homage to the UAE and to Dubai as center of the World Time. The watch was exclusively produced and retailed by the famous Dubai retailer Ahmed Seddiqi & Sons, to mark their 60 year-long partnership. Consigned in virtually as-new condition and with all its accessories, the present watch is a rare opportunity to own a rare modern production Patek Philippe world time wristwatch (estimate: $120,000-220,000). 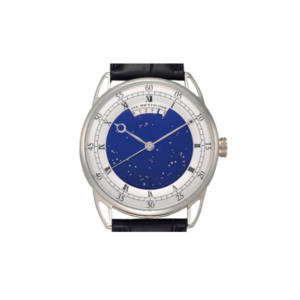 De Bethune is an independent watch manufacturer that started production only in 2002. The auction will present a limited edition white gold tourbillon watch with jumping second from 2014 of which only 20 examples were made. The dial represents a celestial sky with solid golden stars. Over the past few years, star-studded dials have become an integral part of the history of the Maison. Personalised according to a specific geographical location and a given date, the gold pins are fitted one by one on this star-studded sky, thus making each model truly unique (estimate: $120,000-220,000).

DIAMONDS AROUND THE CLOCK 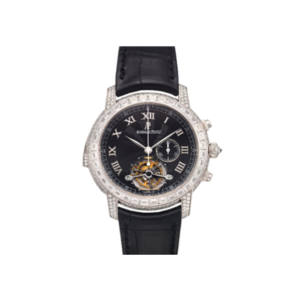 By Hublot, Audemars Piguet and Graff are three of the most important watches with diamonds to be offered in the auction.

An impressive 18 carat white gold diamond set minute repeating tourbillon chronograph wristwatch manufactured by Audemars Piguet in 2008. The wristwatch is set with 36 baguette-cut diamonds around the case, weighing 3.35 carat and another 415 diamonds on the lugs and case, weighing 3.55 carats (estimate: $150,000-250,000).

An impressive 18 carat pink gold and diamond set composed of a tourbillon wristwatch with power reserve by Hublot with matching cufflinks, ring pen and rosary beads, made in 2018. The set represents a total of 1,272 baguette-cut diamonds, 3 solitaires of which the largest one weights over 5 carats and 1,530 round-cut diamonds (estimate: $300,000-500,000).

In 2018 Graff has set a lady’s quartz wristwatch with 28 fancy vivid yellow oval-cut diamonds and fourteen brilliant-cut diamonds of a total weight of 27.55 carats. The reports from the GIA (Gemmological Institute of America) stats the diamonds are weighing between 0.52 to 2.95 carats and are fancy vivid yellow with a VS1 to VS2 clarity (estimate: $200,000-400,000).

Christie’s, the world’s leading art business, had global auction, private and digital sales in 2018 that totalled £5.3 billion / $7 billion. Christie’s is a name and place that speaks of extraordinary art, unparalleled service and international expertise. Christie’s offers around 350 auctions annually in over 80 categories, including all areas of fine and decorative arts, jewellery, photographs, collectibles, wine, and more. Prices range from $200 to over $100 million. Christie’s also has a long and successful history conducting private sales for its clients in all categories, with emphasis on Post-War & Contemporary, Impressionist & Modern, Old Masters and Jewellery.

Alongside regular sales online, Christie’s has a global presence in 46 countries, with 10 salerooms around the world including in London, New York, Paris, Geneva, Milan, Amsterdam, Dubai, Zürich, Hong Kong, and Shanghai.

*Please note when quoting estimates above that other fees will apply in addition to the hammer price – see Section D of the Conditions of Sale at the back of the sale catalogue.