Art in Motion: Purnell unveils the AS Monaco Limited Editions 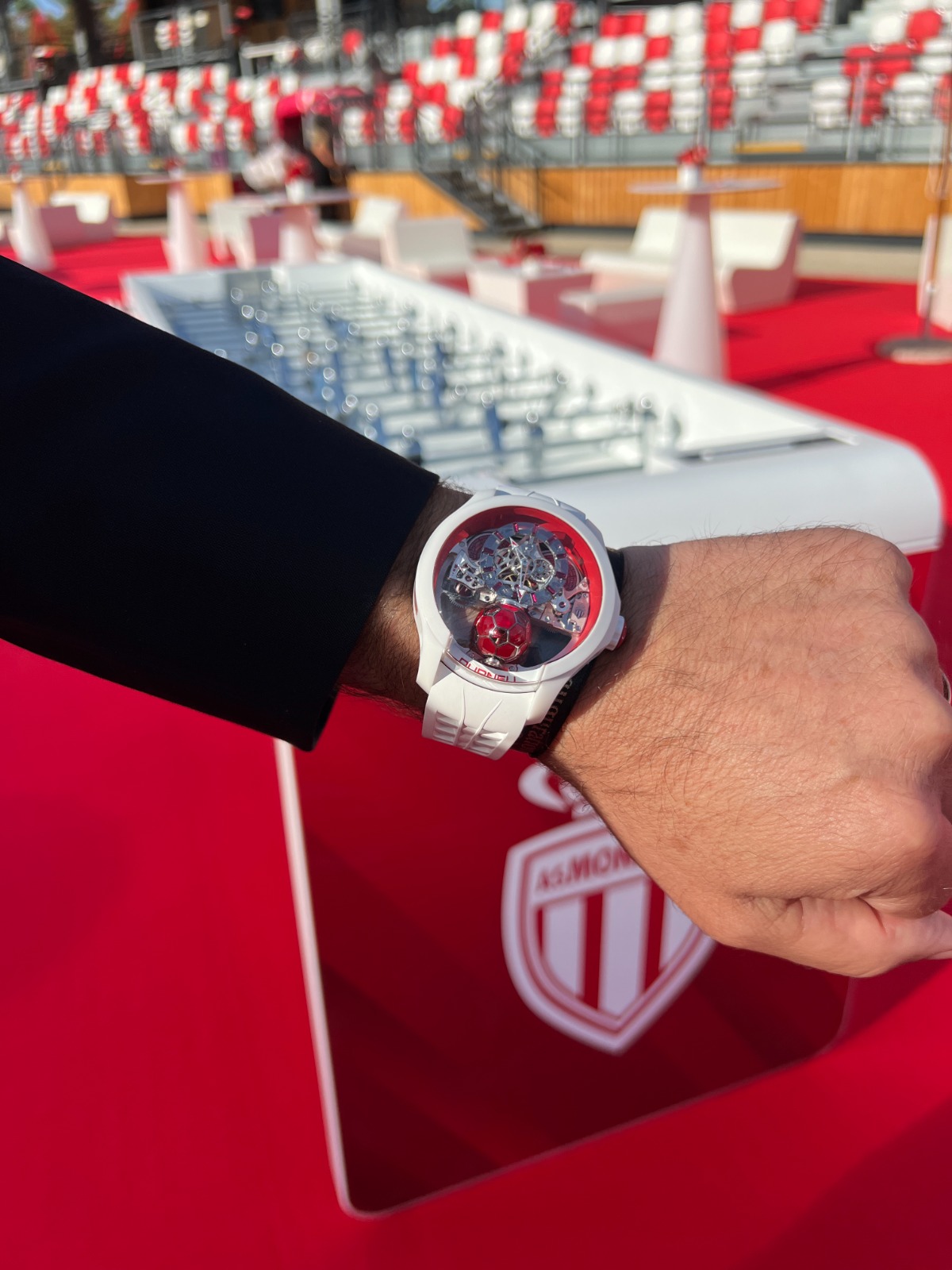 Art in Motion: Purnell unveils the AS Monaco Limited Editions

Art in Motion:
Purnell unveils the AS Monaco Limited Editions

Purnell is proud to present a World First with AS Monaco:
an innovative see-through Rotating Crystal Football, revealing the in-house
flying tourbillon inside.

Rise. Risk. Repeat. A philosophy AS Monaco abides by on the field, and one that matches with Purnell’s “More Future Than Past.”

Crystal Clear
Unveiled in two limited editions of 11 pieces—to match the number of players on the pitch—the Purnell x AS Monaco timepiece features a completely new take on the “football tourbillon” created just a year ago by Purnell.

This iteration shows a football made of 24 hexagons of tinted rock—12 in ASMonaco red and 12 that are transparent. Overall, the rotating football weighs only 1.12 grams, making a full rotation in 30 seconds.

This phenomenon was achieved thanks to Purnell’s association with watchmaking extraordinaire, Eric Coudray, winner of the 2012 Prix Gaïa. With Purnell, Coudray was able to devise a polished titanium skeleton in the shape of a football, where the watchmaker can then place the football’s crystal “facets” one by one. A feat of expert craftsmanship, the result is a hypnotic interpretation of a rotating football in perpetual movement—a first in the world of watchmaking. 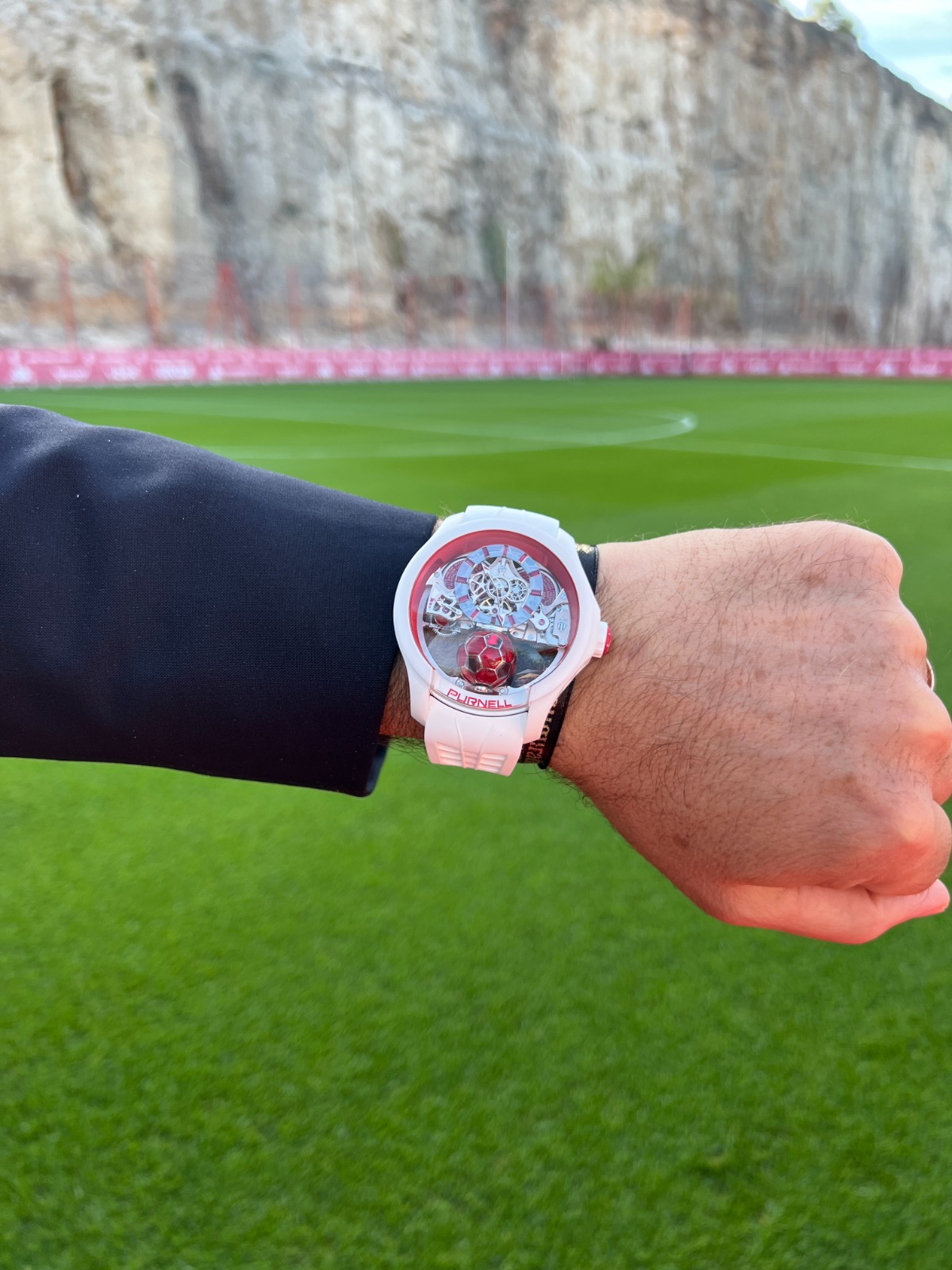 The rock crystal also adorns the dial in the form of the hour indexes tinted in “Daring Red”, the AS Monaco pantone. The hour indexes at 12 and 6 o’clock are bicolor, featuring the football club’s legacy “La Diagonale” pattern that can also be found on the team jerseys.

The two limited editions each come in new colorways. The first sports a 48mm case in White Purnell Microfiber (WPM) with a bezel in Red Purnell Microfiber (RPM), a new case material exclusive to Purnell, while the second limited edition piece shows a more streamlined case entirely in WPM with a red tinted middle case as a nod to the association with AS Monaco. And the final touch: the AS Monaco crest, engraved on the movement bridge at 3 o’clock.

With the goal of bringing the tourbillon to the forefront of avant-garde haute horlogerie, Purnell only associates with the best in their field. The brand found a natural association with the world of AS Monaco, the official football club of the
Principality. A place of renown, regard, and elegance, Purnell found a deep association with these ideals that AS Monaco represents.

In exclusivity for this partnership, Purnell and AS Monaco created 2 limited editions featuring the watch brand’s Caliber P10 with a rotating “football tourbillon”.

“AS Monaco’s slogan—Rise. Risk. Repeat. —matched our own will to create a timepiece that reflected both of our worlds,” says Maurizio Mazzocchi, CEO of Purnell. “We decided to develop a tourbillon in a way that had never been done before: encased in a crystal football, rotating in 30 seconds. A truly spectacular form of fighting gravity.”
A collection available exclusively in Monaco as of September 2022. 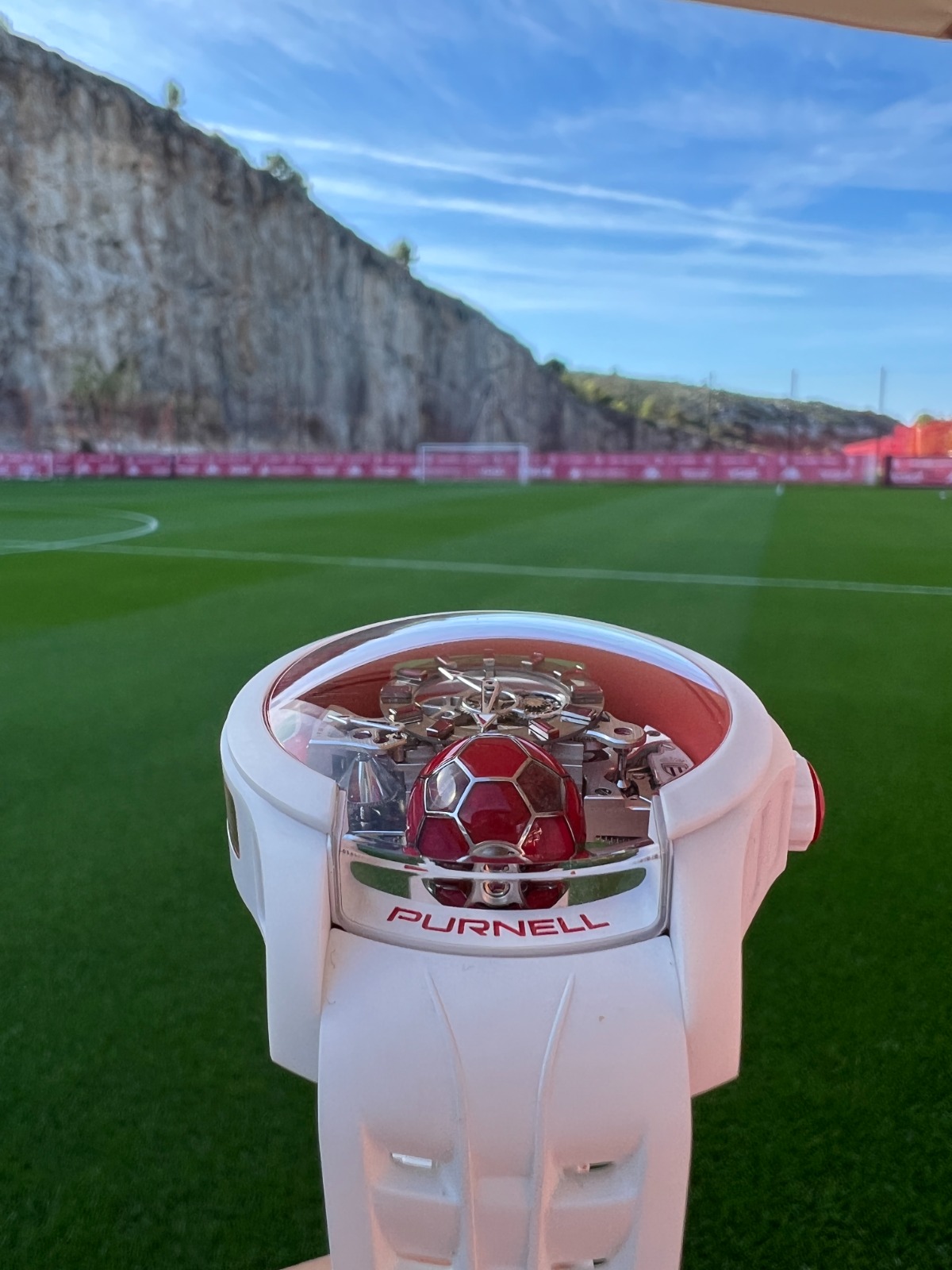 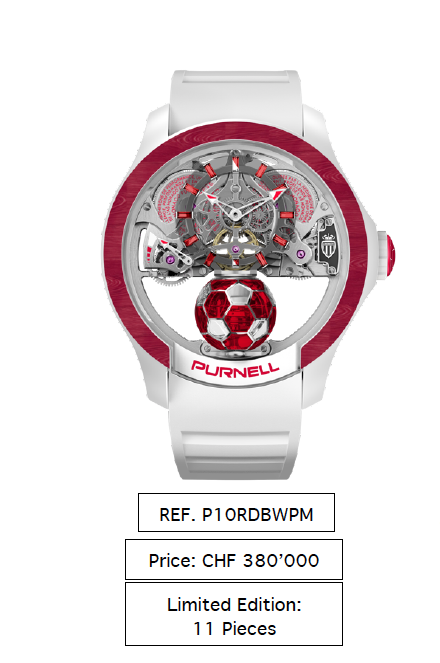 AS Monaco crest engraved and painted on bridge at 3 o’clock.

Translation:
“Recognized for their excellence, guided by the quest for performance, united by the emotions each solicit. Excellence,
performance, and emotion are the timeless values shared by AS Monaco and Purnell. Rise. Risk. Repeat. AS Monaco Purnell.”

ABOUT PURNELL
Purnell creates watches inspired by movement, performance and mechanical prowess, bringing more future than past to the sphere of haute horlogerie.
Established in Geneva with headquarters located at the “Carré d’Or” of the prestigious Rue du Rhône, Purnell continues to astonish with its unmistakable Spherion, the World’s Fastest Triple-Axis Tourbillon, created by watchmaking extraordinaire Eric Coudray. The brand conceives highly complicated and mesmerizing tourbillons, 100% Swiss Made. In 2021, the brand partnered with France Football and the Ballon d’OrTM, presenting an exclusive movement also
created by Eric Coudray. Excellence and performance govern above all amongst Purnell’s core values.

ABOUT AS MONACO
AS Monaco is a historic club of the French Championship, founded in 1924. With eight Ligue 1 titles, ten national cups and two European Cup finals (Champions League 2004, European Cup winners cup 1992), AS Monaco has one of the most impressive records in French football and a strong heritage.
The famous diagonal jersey created by Princess Grace, the Louis-II Stadium built on the Mediterranean Sea, the tradition of beautiful play and the nurturing of young talents (five French World Champions – T. Henry, D. Trezeguet, E. Petit, L. Thuram and K. Mbappé – are from the Academy) are the markers of a club with a unique situation, focused on excellence.
Cosmopolitan, like the Principality of which it is an ambassador, AS Monaco relies on a brand known throughout the world and followed by a large community of more than 20 million fans on social networks.