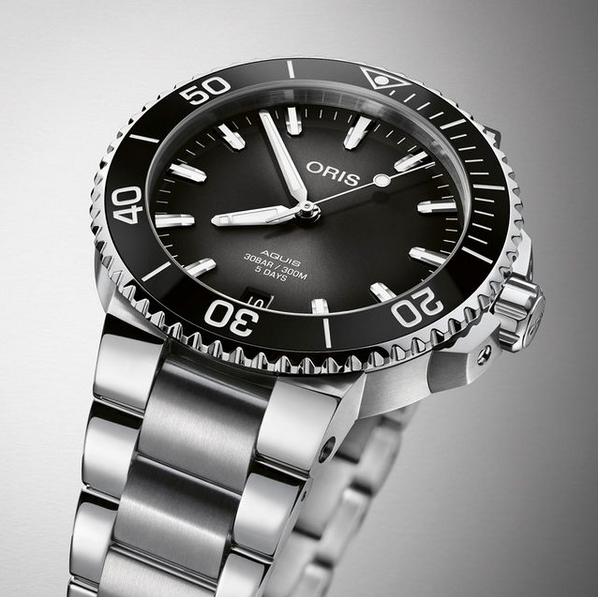 The joy of mechanics rises to the surface in a smaller version of Oris’s versatile diver’s watch powered by the game-changing in-house automatic Calibre 400.

The joy of mechanics

In our digital, connected, touch-sensitive world, the joy of mechanics has taken onnew meaning. Whether we’re looking at a Ferris wheel with its open workings, or a mechanical watch movement through a case back, it warms us to see how things work. At Oris, we’re driven by this joy. Because if there’s one thing our watches have to do,
it’s bring a smile. We know no one needs a mechanical watch. But the simple pleasure of owning one and seeing it work makes life that much more enjoyable. That’s what we mean by the joy of mechanics.

Every Oris watch is inspired by the simple joy of seeing and understanding how things work.

As well as making watches, we love working with mechanically minded people. We commissioned British-born, Swiss-based artist Charles Morgan to create a piece of kinetic art that celebrates our love of Swiss precision mechanics. “Oris Phénomena” is, in Charles’s words, a “clockwork cocktail”.
The work has four two-metre-high steel frames, each a letter spelling the word Oris. “It looks like the sort of crazy rocket with things whirring and wires moving that Heath Robinson would have made,” says Charles.
“It’s meant to make you stop, think and smile. These days everything mechanical is hidden. Think about your phone or your car – the workings are invisible. It’s boring.
We all like to know how things work.” This is why we only make mechanicalwatches. We also create mechanical
movements. In the last eight years, we’veconceived nine new calibres, always pushingthe limits of mechanics to create beautiful watch movements that make the mind wonder and the heart race.
The latest of these sit in the Calibre 400 Series of automatics. With elevated levels ofanti-magnetism, five days of power reserve, accuracy superior to the chronometer standard (even after exposure to magnetism),
10-year recommended service intervals and 10-year warranties on all watches they power, Calibre 400 Series sets the new standard in Swiss Made automatics.

“Mechanical poetry is all about making people smile,” says Oris Co-CEO Rolf Studer. “A mechanical watch, like Oris Phénomena, gives us something to feel joyful about.”

A head for heights

Cédric, tell us a bit about yourself… My name is Cédric Röhrich, I’m 27 years old and I’ve been an Oris watchmaker since 2014. Due to my rather quiet job, I regularly need my portion of adrenalin, so I enjoy getting into nature to go diving or parachuting. Then again, I like to fish.

What have you worked on at Oris?
When I joined, I started in quality control. Then I got the chance to become part of the manufacture department, working on our Calibre 100 Series of hand-wound movements. For the last two years, I’ve been the lead watchmaker on our Calibre 400 Series of automatic movements.

And what does that involve?
My job is to pick up the brilliant concept developed by our chief operating officer Beat Fischli and his team, and to deliver Calibre 400 Series movements ready to go into watches such as the new Aquis Date 41.5 mm Calibre 400. A lot of it is detail. We have to check components, ensure the quality of every part, manage assembly, control
the quality of fully assembled and mounted movements, and generally be available to answer questions other teams in the company have about the Calibre 400 Series.

How does Oris go about conceiving a new automatic mechanical movement?
For us, it’s really important that a mechanical watch lives up to the expectations of today’s watch consumers. People expect a lot of a luxury watch, as they should. It has to deliver beauty, functionality and reliability, and it
has to last a lifetime. That’s a lot to consider when you break it down, but with the Calibre 400 Series, I think we’ve achieved it.

What does that mean, in practice?
One of the basics is a long power reserve. We want Calibre 400 Series watch ownersto enjoy the freedom of knowing they canput their watch aside for a few days without it stopping. It’s not sexy, but it’s also really
important to develop movements that are as simple as possible and not prone to faults so that even if they go wrong they can be repaired quickly and affordably. We favoured dependable components and simplified the
construction, using anti-magnetic alloys that are also highly anti-corrosive. You only really notice how reliable something is when it fails. Hopefully, Oris customers never notice…

Just how sure of its performance are you?
Well, we’ve put a 10-year warranty on all Calibre 400 Series movements and recommend getting them serviced once every 10 years. That’s really unusual with a mechanical watch, which is one of the reasons we’re calling it the new standard.
What we want and what we hope is that we’re passing on watches to people all over the world that they’ll wear with pleasure and pride. I’m an Oris customer myself. I’ve been wearing my Aquis Date Calibre 400 for
several months now. I don’t wear it every day, but I’ve never had to wind it or adjust it.
The accuracy overwhelms me, even though I fully understand how the movement works!

What sort of accuracy are we talking?
We guarantee accuracy of -3 to +5 seconds per day, but it’s very important that under no circumstances should the watch lag. I prefer to arrive early for an appointment than to arrive late. In the case of magnetic fields, it
can be assumed that the watch will return to this same level of accuracy as soon as it is no longer under the influence of magnetism.

Why focus on anti-magnetism?
We encounter magnetism everywhere: in a car, at home cooking, charging our phones… And I’m convinced we’ll encounter magnetic fields much more in the future. We had to think about this when we designed the new
movement. Because who wants their watch to suddenly run inaccurately?

Looking ahead, what can we expect from the Calibre 400 Series?
Let us surprise you… All I can say is we’re not sitting still. We’re busy designing new and exciting developments.

And finally, how does it feel to have been part of watchmaking history?
Fantastic. I’m honoured. And I have a great sense of pride in being a part of Oris history.
But more than that, I love the fact we’ve created something lots of people can own and enjoy. We put smiles on people’s faces. 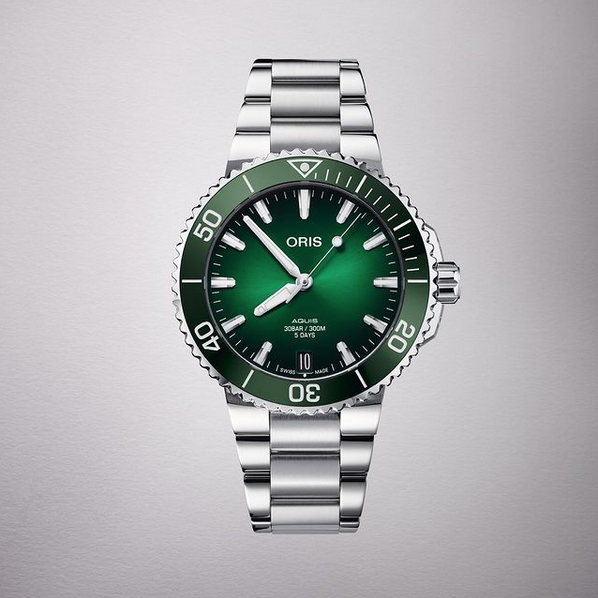 When conceptualising the Calibre 400 Series, Oris’s engineers recognised that these days we may not wear the same watch every day. If you put a standard mechanical watch down for a day or two, it will stop as the power reserve runs down. Calibre 400 Series movements have a five-day power reserve, so they’ll still be running if you’ve not worn your watch between, say, Thursday and Tuesday. They deliver this longer period of use via twin barrels, both of which house an extended mainspring, each long enough to store two-and-a-half days of power.

Oris is so confident in the performance of the advanced technologies integrated into the Calibre 400 Series that
we are offering a 10-year warranty on all Oris watches powered by the new movements when you register
them at MyOris. In addition, Oris is also proposing 10-year recommended service intervals on Calibre 400
Series watches. This means that barring accidental damage or water-resistance checks, you shouldn’t need
to bring in a Calibre 400 Series watch for a service until 2031 at the earliest. This is the new standard.

Invention at its core ( A more stable rotor system)

One of Oris’s fundamental ambitions with the Calibre 400 Series was to eliminate problems before they occur.
Oris’s engineers identified that one of the most frequent issues with automatic mechanical movements concerns
the ball-bearing system that allows the free-spinning oscillating weight (or rotor) to rotate. This is a critical
element of an automatic watch – as the rotor spins, it generates power that’s stored in the mainspring, which
is housed in the barrel. So we removed the ball bearing altogether and replaced it with a low-friction slide
bearing system, in which a metal stud runs through a lubricated sleeve. This is much less complex, highly
efficient, and involves far less wear and tear, making it less prone to breakdowns.

Most Swiss watch movements will be magnetised if exposed to the magnetic forces we encounter in daily
life. When this happens, they become less accurate, and can stop altogether. To make it highly anti-magnetic,
Oris engineered the Calibre 400 Series using more than 30 non-ferrous and anti-magnetic components, including
a silicon escape wheel and a silicon anchor. In testing by the renowned Laboratoire Dubois, Calibre 400 deviated
by less than 10 seconds a day after exposure to 2,250 gauss. For context, the latest version of the ISO 764
standard for anti-magnetic watches requires that to qualify as anti-magnetic, a watch must be accurate
to within 30 seconds a day after exposure to 200 gauss. Calibre 400 recorded one third of the deviation
allowed after exposure to more than 11 times the force permitted, making it a highly anti-magnetic movement. 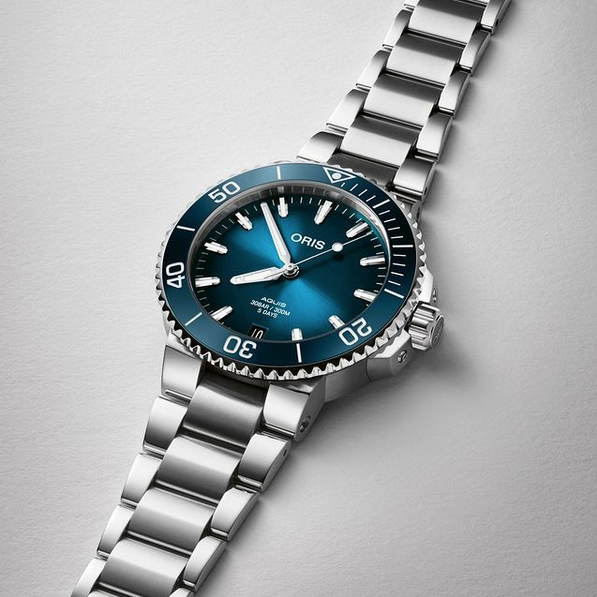 For the first time, Oris Calibre 400 appears in an Aquis Date with a smaller 41.5 mm case. The diver’s watch is available with either a blue, anthracite or green dial.