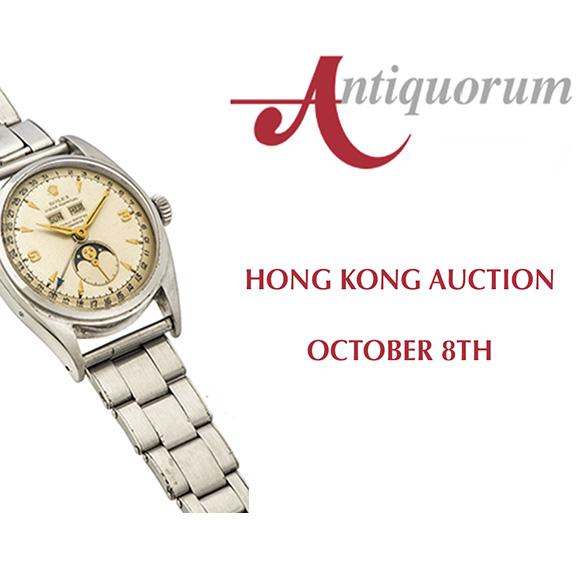 Collectors can look forward to bidding a collection of outstanding modern and vintage timepieces. Previews will be held in Antiquorum Hong Kong show room starting from September 29th. Highlights of this auction include:

ROLEX REF.6062 STAINLESS STEEL (Estimate: HKD 750,000 – 1,500,000) Reference 6062 was produced from 1950 to 1953 in 350 examples, in 18K yellow gold, 50 examples in 18K pink gold and very few in stainless steel. The yellow gold 6062 remained in the Rolex catalogue until 1960. It is interesting to note that in period advertising, this watch was referred to as the Oyster Perpetual COSMOGRAPH. Rolex has produced only two different models of triple calendar with moonphase wristwatches, reference 8171 and 6062. Both models are automatic. However, reference 8171 has a snap on back, while reference 6062, the Oyster version, has a water resistant-type screw back. This watch belongs to a Hong Kong collector and has never been offered at auction. He purchased it in Switzerland around 1955, as a personal gift after his graduation from Imperial College London.Offered either with steel or gold indexes, this example has been maintained in excellent condition. The dial still features its luminous dots matching with its luminous hands and the dial has an attractive two-tone color. Even rarer, the elusive lightly engraved “Registered Design – Model Depose” is still clear and deep on the outside caseback, a definite sign of a very well preserved and little worn example. And even more surprising it is equipped with a rare expendable riveted Rolex bracelet dated 1955, which may very well have been born on the watch. An extremely desirable all original 6062 example, one of the nicest to be offered in the last couple of years.

PATEK PHILIPPE REF. 5074 MINUTE REPEATER PERPETUAL CALENDAR YELLOW GOLD (Estimate: HKD 2,800,000 – 4,000,000) Ref 5074 was launched in 2002. In 2005 Basel fair Patek Philippe presented the pink gold version. In 2009 the platinum version was presented. It is considered the successor of the famous ref. 3974. The mechanism is the same in both references at the exception of the gong which goes twice around the watch case in reference 5074 in order to give a better and louder sound. This type of gong is called “cathedral gong”.

ROLEX REF. 6241 PAUL NEWMAN STEEL (Estimate: HKD 700,000 – 1,000,000) The reference 6241 was the third Cosmograph Daytona to be released and was made from 1961 until 1970. It was available in stainless steel and either 14K or 18K gold with a black plastic insert bezel. As an option, the “exotic dial” or so-called “Paul Newman” dial was available and is today very rare and collectible. The ref. 6241 was replaced by Ref. 6265. The “Paul Newman” models are much rarer than the standard “Cosmograph” dials and consequently are much sought after by collector.

URWERK REF. UR-203 IN BLACK PE-CVD PLATINUM (Estimate: HKD 500,000 – 1,000,000) Self-winding Platinum wristwatch with satellite complication, oil change indication and 150 year Horological Odometer. Limited Edition of 20. URWERK, co-founded by Martin Frei and Felix Baumgartner in 1997, is an award-winning watch brand that is known for its avant-garde designs and complications. “UR” refers to the city of Ur in ancient Mesopotamia where our perception of time was molded over 6,000 years ago by the moving shadows cast by the obelisks of Ur. “WERK” is a German word means to work, create and evolve. This UR-203 by URWERK, which was launched in 2010, is a “wild idea of Martin Frei”. It is an automatic watch comes with a Plasma Enhanced-Chemical Vapor Deposition treated platinum case and carries an innovative and memorable “satellite complication” to perform the mesmerizing robotic hour indication, an “Oil Change” indicator to informs the wearer when a service is due, as well as a “Horological Odometer” to keep track of the total number of years of operation of the movement which works like the odometer on motor vehicles.

Attributed to Piguet & Capt, extremely rare, exceptional 18K pink gold, diamond, enamel, quarter repeating ring watch with automaton. Adjustable shank stamped with French import mark 1809-1819 accompanied with fitted box and key. Circa 1810. (Estimate: HKD 800,000 – 1,500,000) Rectangular-shaped case with cut corners, diamond-set bezel, finely enamel painted blue sky with village and mountain scenery, centered by an aperture revealing the diamond-set balance, surmounted by two putti, their pink gold and enamel automaton arms alternately striking the hours and quarters onto two small pink gold bells in unison with the repeating . Below the diamond balance, has a white enamel dial with Breguet numerals. The repeating slide is on the side of the ring. On the back side, pink gold sliding cover for winding and hand-set apertures. Gilt-finished rectangular-shaped movement, one going barrel and one fixed repeating barrel, two hammers and single bell for the quarter repeating, cylinder escapement located within the bell.

THE ATTRIBUTES OF LOVE. Attributed to Piguet & Capt, Genève, circa 1805. Very fine and rare 18K gold and painted on enamel necessaire with a scent bottle fitted with concealed watch. (Estimate: HKD 900,000 – 1,800,000) Each side made up of three painted on enamel panels, the center ones depicting two putti, one holding a love torch, against a dark green background, the other side depicting a mother holding a baby, gold and azure enamel frames, the whole against black enamel, the top forming the cover decorated with courting doves, musical instruments and Cupid's attributes on the reverse, against black enamel, the lower spring-loaded panel, with courting doves and a flower basket opening to reveal the watch, edges with yellow enamel with translucent imperial blue enamel leaves and repeated engraved pattern. The hinged top reveals the necessaire compartment with gold scent vial with gold stopper, gold ear-spoon, pencil holder and watch key. The top decorated with bouquet of flowers, azure stripe background. (Dim. 91 x 28 x 13 mm)

PATEK PHILIPPE REF.5078 MINUTE-REPEATER WHITE ENAMEL DIAL ROSE GOLD (FACTORY SEALED) (Estimate: HKD 2,000,000 – 4,000,000) An extremely fine and rare self-winding 18K rose gold wristwatch with minute-repeating and enamel dial. 5078P is Patek Philippe’s one and only men’s watch that carries minute repeater as its sole function, and it’s always regarded as “the minute repeater with the best chime”. It was firstly launched in 2005, housing in a platinum case with optional black lacquer or white enamel dial. Later came the rose gold version with the white enamel dial. The automatic movement R 27 PS (which is rarely seen on minute repeater) is equipped with two gongs to perform the glassy chime, which make this reference a highly sought-after piece in the market. The present lot is in a very rare, factory-sealed condition.

PATEK PHILIPPE WORLD TIME REF.5131 WHITE GOLD (Estimate: HKD 680,000 – 880,000) Firstly introduced in 2009 Baselworld, the white gold 5131G is a new version to its previous model 5131J, which was launched in 2008 with a yellow gold version. Also note-worthy is the change of the cloisonné enamel world map between two versions. 5131J covers Europe, Americas and Africa, while 5131G takes out Americas and include Asia and Australia instead.